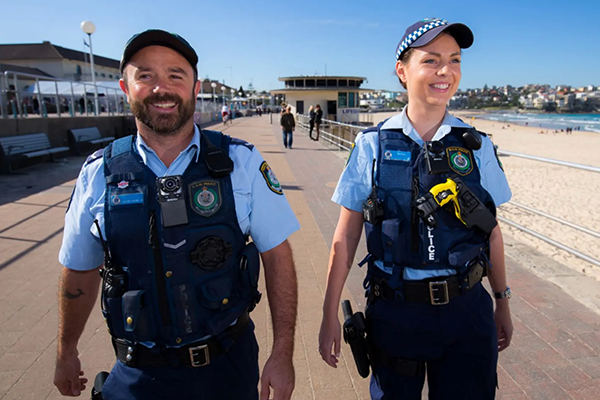 NSW Police on the beat are being fitted with body cameras that will allow them to collect visual evidence and record their interactions with others.

The first frontline officers attached the cameras to their uniforms on Thursday as part of a rollout to city and transport police.

Encrypted footage with audio is captured and saved or can be live-streamed to remote command posts.

Police will use the cameras by manually pressing record when they need to take footage.

Acting Assistant Commissioner Steve Cullen said the cameras would be attached to the front of an officer’s body and video taken from their point of view.

“While the cameras will be constantly viewing the officer’s point of view, the officer must initiate recording to actually capture footage in the memory of the camera,” Assistant Commissioner Cullen said.

“There will be a 30-second back capture of vision only, which can allow for the visual recording of an important piece of evidence.”

Once the footage is downloaded onto the secure police database, all footage on the camera is erased.

Deputy Premier and Police Minister Troy Grant said cameras would be used just like a notepad and would help officers called to domestic violence cases.

“Body-worn video cameras could also assist in domestic violence cases where victims may be vulnerable and reluctant to give evidence.”

NSW Police Commissioner Andrew Scipione​ said the footage would be helpful for gathering evidence to support prosecutions but also for police to use as a training and education tool.

“A picture is worth a thousand words, and if you’re recorded doing the wrong thing – no matter who you are – the evidence will be tough to dispute,” the commissioner said.

He said trials of the equipment found the cameras reduced the time spent on paperwork, enhanced the preparation of evidence and improved the behaviour of officers and the public.

The government will spend $4 million over the next two years rolling out the cameras to three local area commands and the police transport command.

All front line officers across the state are expected to be kitted out with body cameras once the initial roll-out has been trialled.